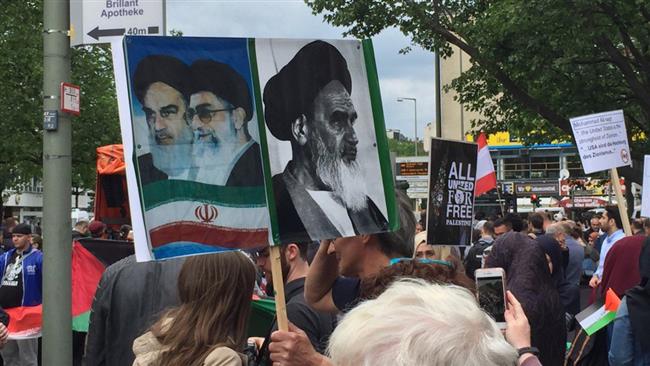 Israel has reacted with fury to a rally by hundreds of pro-Palestinian demonstrators in the German capital of Berlin on the occasion of the International Quds Day.

The Friday march drew some 600 pro-Palestinian activists, who were heeding a call by the late founder of the Islamic Republic, Imam Khomeini, to march for Palestine on the last Friday of every Ramadan.

Back in 1979, Imam Khomeini declared the last Friday of the holy fasting month of Ramadan as the International Quds Day, demanding Muslims worldwide to demonstrate on the occasion to remind the world of the plight of the Palestinians under Israeli occupation and aggression.

The occasion was honored by millions of pro-Palestinian and Muslim activists worldwide.

The German capital has hosted Quds Day marches for many years, including this year on Friday.

The demonstrators in the Berlin rally held up banners bearing the slogans, “Free Palestine, Boycott Israel,” and “Resistance against Zionism.”

They also carried pictures of Imam Khomeini, and those of Leader of the Islamic Revolution Ayatollah Seyyed Ali Khamenei, as well as Secretary General of the Lebanese resistance movement of Hezbollah, Seyyed Hassan Nasrallah, whose group has fought off two Israeli wars on Lebanon.

Rogel Rachman, an Israeli official at the embassy in Berlin, wrote in the embassy’s newsletter, that the embassy had “appealed to the mayor to send a clear signal against” the event and “deny on legal grounds the annual event.”

The mayor’s decision was “not to be tolerated and wrong as only wrong can be,” Rachman said.

Imam Khamenei in a meeting with participants in 13th PUIC Conference

Speech made by the Supreme Leader of the Islamic Revolution during an ...